When I first got my Helix, it was right about the time that the firmware dropped with the Litigator model.  That update was actually what pushed me over the edge to buy Helix in the first place.  I’m a huge fan of the Dumble style tone, have been for years.  I own a Fuchs ODS 50 HRM, which is simply a fantastic amp, and one of the most well respected “D style” amps on the market today.  So when I opened up the Litigator model, I was a bit thrown off.  There was no individual controls over the gain stages. My Fuchs, being true to the dumble circuit has an input gain control, and a second gain control for the OD stage. There were no deep, bright, or Jazz/Rock switches. there was no gain boost, no mid boost, and seemingly, no overdrive channel at all. I was perplexed as to how I was going to make this thing sound like a dumble.

Now please don’t get me wrong.  It sounds fantastic, and even gets close to my beloved Fuchs, ….but not quite. So for the past several months I’ve been on a mission to “tonematch” my Fuchs, set the way I like it, in my Helix.

For reference..Here’s the settings I used for this entire project.  So the question is basically where do we start? How do we set up a test rig for a real amp?  How do we even test it?

For starters, I often run my amps with my Helix using what I call the 2 cable method.  I honestly don’t know if thats the right name, but its the one I use.  Basically I put the entire amp in an fx loop on Helix, using a reactive loadbox, so its 2 paths send and return, which is why I use the term 2CM.  Its send from helix to amp input, amp output to Two Notes Torpedo Captor, and then DI out back to Helix.  Works like a charm.  Drop it in my favorite patch, add a Litigator, set a footswitch so I can A/B them. I dial my Fuchs in the way I like it, Get the litigator close and away we go.  So I start by doing a sweep of the clean channel and see the EQ curve and compare it to the Litigator, make a few tweaks and we get this.

Here we have The Fuchs in green and the Litigator in Blue. As we can see from 100hz to around 5k they’re virtually identical.  I’ve got them pretty close EQ wise. The low end actually mimics the Fuchs OD channel pretty well, so I’m betting that the litigator is based mainly on the OD channel of a D style amp. Also, for whatever reason it appears to me that some kind of high cut or something was applied to the amp model.  In the end this ends up being something you really just cant fix. To a certain extent some EQ can be applied to it to bring some of that back, but its hard to make something from nothing.  I’m not going to worry about it too much right now.  Time to check the waveforms. 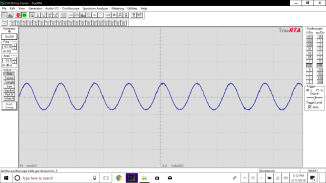 Now they’re virtually identical here, but that’s a pretty quiet signal. lets bump it up to -18db and see what happens.

As you can see the Fuchs is producing asymmetrical waveforms as it gets pushed, and Helix isn’t. This pretty much happens throughout the entire spectrum, and the Fuchs becomes more sensitive to it as we go up in pitch.

Here’s the Fuchs’ waveforms at -26db (below) for reference. 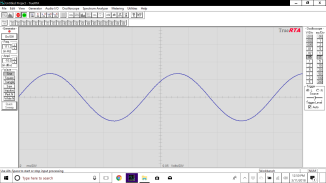 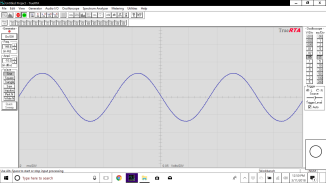 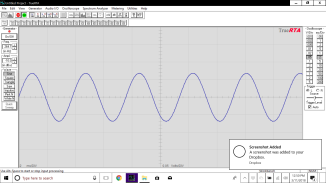 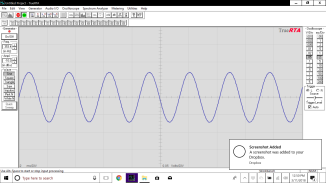 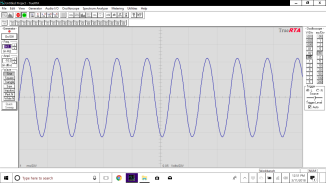 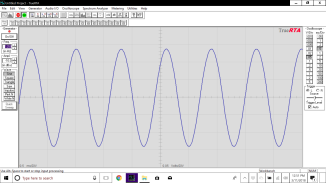 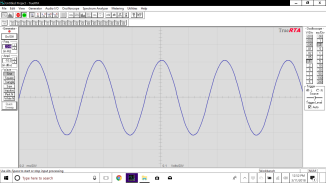 As we can see when it’s not pushed its pretty symmetric, and un-distorted right through the entire spectrum.  The helix behaves the same way when not pushed. So since this is the clean channel were after, it’s likely not that big a deal, we won’t be pushing it too hard to play cleanly.  Plus the waves are still rounded, and will sound pretty smooth.  It ain’t perfect, but it’ll have to do, plus I really can’t tell the difference between the two when I play them.  Its that close.  All the fabulous dynamics the Fuchs is known for are right there for the taking. Here’s a sound sample.

So now lets go on to that drive channel. lets see how close we can get it with only one gain knob.  Lets start with the waveforms this time.

Here we are at 83hz Helix is on the left.

As we can see the Fuchs is behaving differently here. It’s doing the asymmetric wave thing again, while helix is pretty much un-distorted. 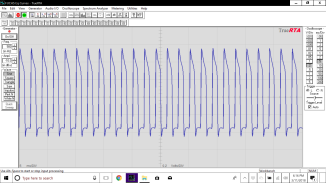 Both are distorting here, and Helix is actually starting to perform more like the Fuchs. They’re both getting pointy on the ends, and moving towards becoming more similar. 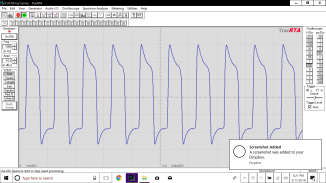 Here we are at 1khz Helix (left) Fuchs (right)

They’re virtually identical from here on up, Its pretty remarkable actually. 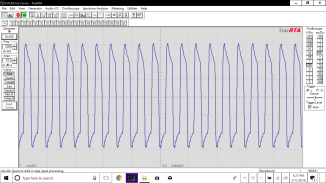 So basically from 500hz on up the 2 amps are virtually identical. As to why they’re different below 500hz, I’m not really sure.  Best guess is different power tubes.  Dumbles, Fuchs’ Bludotones, 2 Rocks all come with different power section options, and there’s a decent chance that’s what’s behind the variation, But again, I’m not exactly sure.

Now lets move on to EQ because we know we’re going to have some work to do here.  Virtually all of the changes in controls that I’ve made so far were to make the waveforms match up. So we’re likely way off. 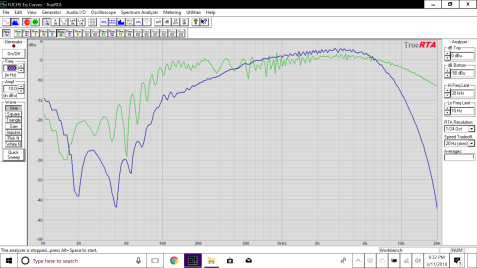 Yep, we’re way off.  Time for EQ So I play around with the eq for a bit, I finally make an IR using match EQ and get them where I want them.  Now I try the patch, and they sound really similar, but no way you would call them identical.  The Helix has way less gain, its way less compressed, and just not nearly as glorious as my Fuchs. At this point I’m pretty convinced that the lack of an input gain control is limiting the Helix model from really shining.  So I take a Litigator preamp block and put it in front of the amp and play around.  Its definitely better, but still not enough gain, even with the preamp block dimed it doesn’t get loud enough to compress the Litigator amp model. Its not even close, and remember my settings from up there, both of my input gain controls are at maybe 10:00, nowhere near approaching what the Fuchs is capable of producing.  So I scratch that idea and add a gain block, and bingo, that really wakes it up.  A little fiddling, and a switch to a kinky boost, adjust some EQ we get this. 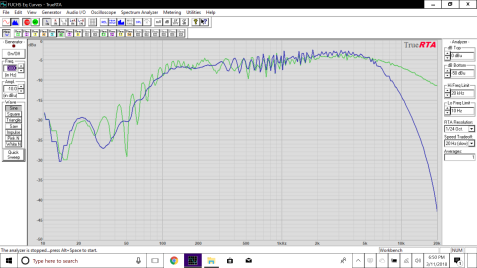 But how does it sound?  Meh…  Don’t get me wrong, It’s close, really close but there’s 2 problems.  First the high end roll off of the helix model is apparent.  Its just a little bit of sizzle, but it’s notably absent. Second the Fuchs has this mid thing…  It’s almost like a cocked wah.  The Kinky Boost helped bunches, but it seems to me to be just too broad of a boost.  Too much lower frequencies, and its just too mushy and compressed.  An important thing to realize.  D style amps have a Gain Boost on a foot switch.   This boost drops the tone stack entirely out of the circuit and sends the signal directly from the first gain stage to the overdrive stage.  Basically it cascades clean into overdrive, and gives you controls for both stages.  Lets see what the boost looks like on the clean channel where its not compressing, and we can get a good idea.

So it looks like we need to add some mids in front of the amp.  The high end stuff doesn’t matter because the Litigator model cuts that off anyway. Lets put an EQ in front of our Litigator and see what we come up with. 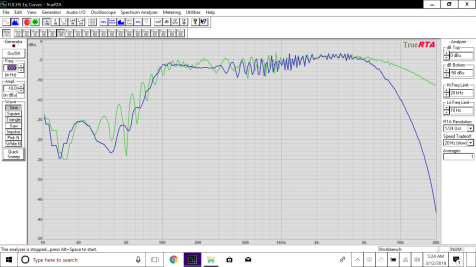 Here’s the EQ curve and the Eq settings I used instead of the Kinky boost. Lets give it a go on the clean channel to see how it sounds before we hit the front of the drive channel. Here’s a sound sample.

I’m pretty darn impressed.  It sounds pretty darn close on the clean side.  Now lets see what we get with the overdrive channel.

So how does it sound?  …Well Its glorious, Absolutely Glorious. Its not exactly perfect on the overdrive channel. The Fuchs compresses more, and there’s that high end roll of thing. Small issues, but issues nonetheless, and I hear them and miss them, but at the end of the day I’d be pretty happy with this patch in the absence of my Fuchs.

Here’s the link to the patch on CustomTone

Thats all for today.

3 thoughts on “Tone Matching my FUCHS ODS to the Line 6 Litigator.”