A lot has been made of the fact that Helix does not have options for adjusting Mic Axis, and distance. The seemingly simple little studio trick of changing the axis (angle) of an SM57 to “soften” it’s the hard edge, or pulling a Royer 121 ribbon mic back from the grill cloth to help reduce the boominess of the bass…  How could this be missing, and is there a way we can simulate this effect in helix?

Well the first, and most obvious method is just use IRs They come with gobs of files that cover all of your bases.  Find the one you like and bingo you are all set.  Now not everybody likes dealing with IR’s, the sheer volume of files to chose from can be daunting.  Plus there’s loading them and keeping them organized. Thankfully Helix updater handles most of this for us now, also there’s the issue of what do you do if you have a cab setup in helix you like but you just need more versatility. Well until recently here I was stuck just messing around with EQ blocks trying to soften the harsh bite of some mics, or tame the bottom end of others.  That is until I saw this video from Jason Sadites

The technique uses a split crossover block with a gain block on the upper and lower path.  By using those gain blocks you can essentially create a high and low shelving EQ within helix and come up with a very workable hack to simulate moving a mic around a cab.

The graph above is what that EQ looks like.  Here in blue I have it set to a 750hz crossover, and a bass boost of 3.9db and a treble cut if 1.3 db.  In green its just the reverse.  I just picked these numbers at random but they do a pretty decent job of showing how this works.  so now how do we apply it? Lets start by looking at a few examples. 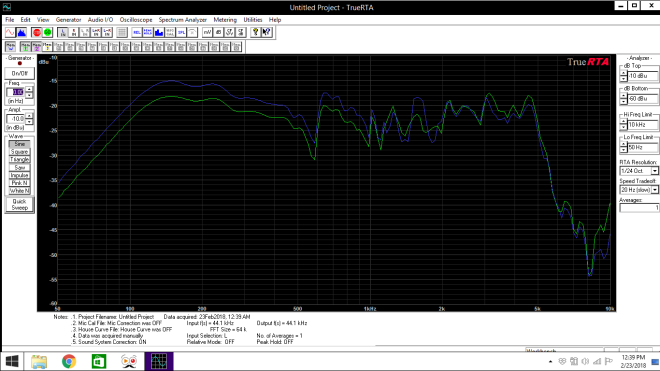 Here we have a Marshall cab with an SM57 as measured from 2 notes wall of sound software.  The Green graph is with the mic centered on the cone and on axis.  The blue graph is with the same mic and cab, just with the mic 33% off of center, and approximately 30 degrees off axis. (The manual is a bit vague but I set that control to 33%) We can clearly see a difference. We have a pretty constant 3db Increase in bass from around 100hz all the way to about 1khz.  where the difference starts to decrease. it first crosses over at about 1100hz and crosses back and fourth a few times until it crosses for the last time at around 2100hz. If I was setting up my helix to replicate this difference I would set the crossover at 1600hz I would put a 1.8db cut on the trebles and a 3b boost on the bass, and adjust from there. Lets try it and see what we get.

The pink graph is the result.  It is the same SM57 model from wall os sound, set with the control on zero, so on the cone and on axis (ouch). So its essentially the green graph with the split block trick applied to it. lets look closely at only those 2

Here we have the Off axis 57 in Pink and the on axis plus the split crossover in yellow.  its really pretty close, It just looks like were about 2 db high in the 1-2k range, so lets adjust our eq at the end of our patch accordingly.

Here it is with a parametric eq with -3db cut at 1.2khz and a q of 10. I really don’t think I can get it any closer than that using this method, but honestly its a fantastic workaround that’s already part of helix.

Big thanks to Jason Sadites for showing us how to do this.

I’ll be following up shortly with more posts on this subject including more mics, and how to create IR’s to do the same thing.

That’s all for now.